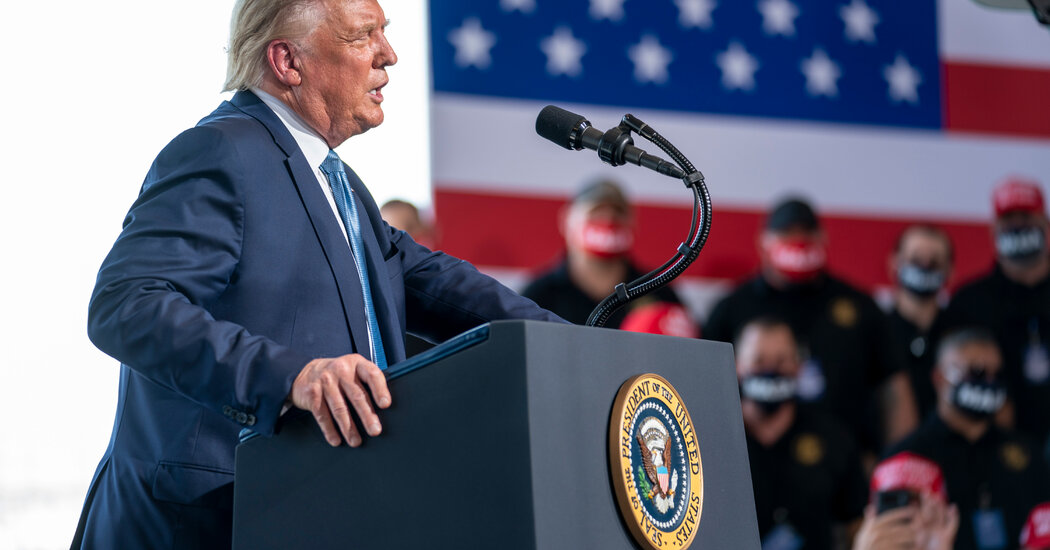 Speaking at an airport hangar, Mr. Trump boasted about his own efforts to sharply limit immigration during his time in office, claiming to have made the country safer by blocking asylum seekers, refugees and other immigrants seeking to live and work in the United States.

The president reprised the darkest language of his 2016 campaign, warning that should Mr. Biden win the presidency, the Trump-era restrictions on foreigners would be abandoned in favor of policies that he said would allow “aliens with criminal records” to roam free across the country, threatening violence and stealing jobs from Americans.

That message is already at the center of the attacks that Mr. Trump has leveled at Mr. Biden and his running mate, Senator Kamala Harris of California. In remarks this week, Mr. Trump falsely claimed that Mr. Biden supported allowing anyone to enter the United States.

On Tuesday, he called Mr. Biden’s proposals a “recipe for abolishing America’s borders.”

Mr. Trump’s anti-immigrant stance helped him win the election in 2016 and has been at the core of his presidency. He has denied entry to foreigners seeking protection from persecution, tried to end a program shielding from deportation young people brought to the United States illegally as children and cut back on legal immigration programs.

While courts have blocked some of his most extreme efforts and he has failed to persuade Congress to overhaul the nation’s immigration laws, the president and his top aides — including Stephen Miller, the architect of his administration’s assault on immigration — have succeeded in enforcing many regulations and policies aimed at making it harder for immigrants to enter the United States.

And Mr. Trump has built a small part of his promised border wall, though he has failed to get Mexico to pay for it.

On Tuesday, he said that Mexico was paying for the wall, then told reporters that the United States might impose a small fee on anyone who crosses the border. Pressed on how that would work and whether it had already started, Mr. Trump said that it was under consideration but refused to give any details.

“We won, we got the wall,” he said, claiming that his administration had built almost 300 miles of wall, though he did not disclose to the crowd that most of that was replacement of border barriers that had already existed before he was elected.

Hours before the president’s speech in Yuma, a coalition of more than 100 pro-immigration organizations released an “action plan” of recommendations for how Mr. Biden could roll back Mr. Trump’s policies and improve the nation’s immigration system.

The report, obtained by The New York Times, lists 10 broad steps, including decriminalizing immigration, protecting immigrant children and families, phasing out immigration jails and restoring the “right to seek and receive protection from persecution” at the border.

“We need a vision,” said Tyler Moran, the executive director of the Immigration Hub and one of the leaders of the effort. “It really is a road map that we think a new administration can take.”

Ms. Moran said the Biden campaign already had a “strong platform” on immigration, but she said the coalition planned to share its action plan with the campaign on Tuesday in the hopes that they could work together during a transition if Mr. Biden won.

The recommendations include enacting a moratorium on deportations pending a comprehensive review of immigration enforcement, reinstating and expanding the program for young immigrants known as DACA, repealing all “Muslim, African, refugee and other travel bans,” establishing a White House “Office of New Americans,” and suspending all criminal prosecutions for migration-related offenses.

As candidates, Mr. Biden and Ms. Harris have repeatedly condemned the president’s immigration policies, accusing Mr. Trump of embracing a xenophobic approach to foreigners and vowing to reverse many of the administration’s policies if they win the White House.

But Mr. Biden has been careful not to endorse some of the most extreme ideas among some in the Democratic Party, who have called for abolishing ICE.

The issue can be a tricky one for the Democratic ticket. Many liberals in the party are eager for someone to completely repudiate Mr. Trump’s policies like the decision to separate migrant families at the border and refusing entry to asylum seekers fleeing from poverty, war and persecution.

But some moderate Republicans — especially in critical swing states like Michigan, Ohio and Pennsylvania — are likely to be turned off by the impression that Democrats are the “open borders” party, as Mr. Trump claims.

During the coronavirus pandemic, voters in those states could be looking for someone to blame for their economic instability. Despite scant evidence, Mr. Trump will be eager to suggest that immigrants are at fault for their failure to obtain good-paying jobs.

In his remarks on Tuesday, the president focused on physical threats from immigrants, drawing cheers from the crowd by declaring that he was “proudly defending the jobs, safety and security” of the American people.

Repeating almost word for word the contentious comments he made on the day he announced his campaign in the summer of 2015, Mr. Trump said that “we have people coming into this country, some great people, some really bad people, too. I mean murderers. I mean rapists. I mean, really bad people.”

His appeal to the crowd was simple: Vote for me, or Mr. Biden will put you in danger with “insane and lethal” immigration policies.

“A flood all across our border and prosecution of illegal border crossings ensuring that illegal aliens will repeatedly re-enter the country over and over again, and terminate all protections we have enacted against asylum fraud,” Mr. Trump predicted. “They want to do things that nobody thought was even possible.”

What is an EDD Number? An EDD Customer Account Number is the 10-digit state unemployment insurance identification number that the Employment Development Department of California assigns to a … END_OF_DOCUMENT_TOKEN_TO_BE_REPLACED

As an immigration attorney, I try to provide clients with a basic, yet insightful, understanding of various aspects of a complex immigration system. It’s not always easy, but I often find analogies to … END_OF_DOCUMENT_TOKEN_TO_BE_REPLACED