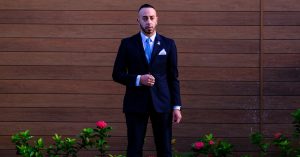 Immigrant ‘Dreamers’ in Search of a Job Are Being Turned Away

MIAMI — Nattily dressed in a sports coat and slacks, David Rodriguez took a seat in the front row to hear a presentation about an internship opportunity at Procter & Gamble, the consumer giant.

What he heard excited him, said Mr. Rodriguez, a Venezuelan immigrant who was studying business at Florida International University. The company valued diversity. It aimed to hire interns as full-time employees after they graduated. But when he applied, one question on the form stumped him: “Are you currently a U.S. citizen or national, OR an alien lawfully admitted for permanent residence, OR a refugee, OR an individual granted asylum?”

He was none of these things. He informed the company that he was a beneficiary of the Deferred Action for Childhood Arrivals program, or DACA, under which he and thousands of other young immigrants have permission to work legally in the country.

Before his qualifications were even considered, he received a rejection letter.

“It was like a punch in the stomach,” Mr. Rodriguez, who is now 37, said of the experience in 2013 that undermined everything he understood about his status in the United States.

He is now a plaintiff in a lawsuit that seeks to use civil rights law to prevent employers from turning away immigrants like himself, a legal fight that is underway even as President Trump is threatening to end the program.

Since its introduction by the Obama administration in 2012, DACA has enrolled some 800,000 undocumented immigrants, often called Dreamers, who were brought to the country illegally as children. Many have gone on to graduate from college and build successful lives under the program, which has bipartisan support in Congress.

Yet while the courts have accepted DACA’s legality and have blocked the recent attempts to abruptly cancel it, some of the country’s biggest companies are unilaterally refusing to hire Dreamers. Since Mr. Trump stepped up his attacks on the program, the employment roadblocks have become even more prevalent.

These employers, including Procter & Gamble, say they are wary of investing time and money to train workers whose long-term employment eligibility is not secure. Other firms want to avoid getting ensnared in the nation’s contentious immigration debate.

“On the one hand employers are trying to hire the best talent available to stay afloat and recover from Covid-19 while on the other hand they are worried about investing the time and resources to train someone who could get deported,” said Woody Hunt, the co-chair of the American Business Immigration Coalition, a group that advocates immigration reform.

It is impossible to know how many people have been denied jobs based on their DACA status, said Thomas A. Saenz, president and general counsel of the Mexican American Legal Defense and Education Fund, which has filed several lawsuits against companies that refused to hire DACA recipients.

Bank of America and Northwestern Mutual are among those that have settled such employment cases. M&T Bank and Procter & Gamble are defendants in current lawsuits.

Concern about hiring DACA recipients has intensified since the Trump administration announced in September 2017 that it would dismantle the program, throwing its survival into doubt even as courts forced the government to keep it in place.

“Employers come to me saying, ‘I would love to hire this person but my worry is that I hire them, invest three or four months in training them and if Trump does away with the program then I have to hire and train a new person.’ That gets expensive and time-consuming,” said Dagmar Butte, an immigration lawyer in Portland, Ore.

“I tell them, ‘If you really like this person, this program is not dead yet. So you shouldn’t assume they will be unable to continue working for you. But if your reason for not hiring the person is a business reason, then that is a decision for you to make,’” Ms. Butte said.

Some employers say the advantages of hiring DACA recipients outweigh the risks.

Alivio Medical Center, located in an immigrant enclave of Chicago, employs doctors, nurse practitioners and physician assistants who have employment eligibility through DACA, aware that they are “potentially deportable,” said Esther Corpuz, its chief executive.

She said their life experiences as immigrants and diverse cultural backgrounds are assets. “These providers really are able in a professional and empathetic way to treat our patients,” she said.

David MacNeil, who built an automotive accessories empire, WeatherTech, in Bolingbrook, Ill., said some of its “very best” employees are DACA recipients.

“U.S. educated and bilingual, they help us sell American-made goods all over the world. We couldn’t support our export customers without them,” said Mr. MacNeil, a Trump supporter who said he would not consider terminating an employee who has a legal work permit simply “because they might not be able to continue to work for you.”

That came close to happening to Ismael Hernandez.

He graduated from DePaul University in Chicago with an accounting degree in 2013, a year after DACA was introduced.

“It felt like I could open a window and feel a cool breeze for the first time; I could breathe,” recalled Mr. Hernandez, 29, who was brought to the United States from Mexico when he was 5 months old. He amassed the necessary documents and plunked down $465 to apply for the program, renewing every two years.

Thanks to DACA, he qualified for a job at a top accounting firm. A few years later, he took a position in the tax department of a well-known internet company, also in Chicago. But when the Trump administration announced it would wind down the program, Mr. Hernandez was summoned for a meeting. “I had a gut feeling that it was about DACA,” he recalled.

Across the table, a human resources officer and two company lawyers explained that they would have to discuss a “contingency plan” for his job, in view of the administration’s move to end the program, and that they must tell Mr. Hernandez’s manager about his precarious status.

The next day, the situation got worse. “We don’t know if you’ll even be able to stay in the country,” Mr. Hernandez said he was told. “We need to think of the company. We want to post the job.”

Fighting back tears, Mr. Hernandez urged them to wait until his DACA status expired the following year before taking any action. Ultimately, they agreed.

In the meantime, Mr. Hernandez married an American and received a green card. He has since changed jobs.

The first DACA employment lawsuit, in 2014, was filed in federal court in New York against the financial company Northwestern Mutual on behalf of Ruben Juarez, a college graduate and immigrant from Mexico.

In late 2013, a recruiter had expressed enthusiasm for hiring him. But after he presented his work permit, Mr. Juarez was asked whether he was a U.S. citizen or green-card holder, according to court documents.

Mr. Juarez said he had employment authorization through DACA, and was told that noncitizens needed a green card to be hired. The parties settled out of court in 2015, and as part of its terms, the company began a program aimed at recruiting immigrants, including DACA recipients.

In Miami, Mr. Rodriguez never imagined that he would end up being part of a class-action lawsuit against the maker of iconic brands like Pampers, Tide and Crest.

He still remembers the day he received his employment authorization card in December 2012. “I felt like I had just unwrapped a chocolate bar with a golden ticket,” he said of the card, the size of a driver’s license, tucked in his wallet.

Having worked for years at restaurants and bars, he could put his higher education to use and fulfill his professional aspirations.

After he was rejected for the internship at Procter & Gamble, he sought clarification from the company’s recruiter. “Unfortunately, per P & G Policy, applicants in the U.S. should be legally authorized to work with no restraints on the type, duration, or location of employment,” the recruiter emailed back, adding, “If your status in the future were to change to no restrictions, please shoot me a note.”

The case, which is now pending in Miami federal court, turns on language in the Civil Rights Act of 1866 that prohibits “alienage discrimination,” or discrimination because a person is not a citizen of the United States.

The complaint asserts that Procter & Gamble’s policy constituted unlawful discrimination. The company’s lawyers argued that the decision not to hire Mr. Rodriguez was based strictly on his immigration status, an issue that is commonly a subject of employment decisions. It said the rejection was not unlawful because it was “not synonymous” with alienage discrimination.

In June, a federal judge denied a motion for summary judgment and decided that the case should proceed to trial, deeming the policy to be “facially discriminatory” and in violation of the civil rights law. The company is seeking to appeal the summary judgment ruling.

Procter & Gamble said the company believed it had acted legally and would continue to defend the case in court.

“For perspective, we hire people with the expectation of a long-term career,” the company said in a statement. “So our recruitment systems focus on people with long-term work authorization in the U.S.”

It said the company’s application process had been modified to allow for greater flexibility since the lawsuit was filed. “The company has and will continue to consider individuals authorized to work under DACA for employment opportunities at P & G.” It did not say whether any DACA recipients had been hired under its revised policies.

His hopes of working at Procter & Gamble dashed, Mr. Rodriguez decided to pivot to real estate, a booming sector in Miami.

He currently works at Lincoln Property, one of the country’s largest real estate management companies. In Miami, one of the most diverse cities in the country with a booming population of Spanish-speaking immigrants, Mr. Rodriguez himself is a hot property.

Source: Immigrant ‘Dreamers’ in Search of a Job Are Being Turned Away

What is an EDD Number? An EDD Customer Account Number is the 10-digit state unemployment insurance identification number that the Employment Development Department of California assigns to a … END_OF_DOCUMENT_TOKEN_TO_BE_REPLACED

As an immigration attorney, I try to provide clients with a basic, yet insightful, understanding of various aspects of a complex immigration system. It’s not always easy, but I often find analogies to … END_OF_DOCUMENT_TOKEN_TO_BE_REPLACED