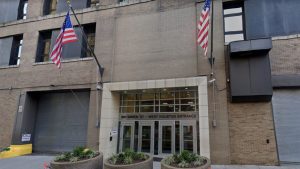 The entrance to one of New York City’s three immigration courts in lower Manhattan. Photo via Google Maps.

The Executive Office for Immigration Review (EOIR), the DOJ component with jurisdiction over the immigration courts and the Board of Immigration Appeals (BIA), has in recent months taken to posting a page captioned “EOIR OPERATIONAL STATUS DURING CORONAVIRUS PANDEMIC”. It provides updates on which immigration courts are open during the Wuhan coronavirus pandemic, and which aren’t. Surprisingly, two immigration courts in New York City, one the nation’s largest, remain closed, except for detained cases and filings. EOIR needs to do what it can to get them open.

I use the adverb “surprisingly” for three reasons.

First, the New York immigration courts remain shuttered while many other courts, including those in erstwhile coronavirus hotspots, have reopened.

At the outset of the pandemic, that EOIR page looked like the departures sign at O’Hare during a blizzard. Other than detained courts, every other immigration judge was at home, and every other courtroom was empty. Now, the “OPEN” signs seem to outnumber the “CLOSED”, “OPEN FOR FILINGS ONLY”, and the “OPEN FOR FILINGS AND FOR DETAINED HEARINGS ONLY” signs.

Even the Newark Immigration Court, separated from Manhattan and the New York immigration courts by a small peninsula, is “OPEN”. Why not Gotham?

Why not, indeed, leading me to my second reason: Schools will be in, but immigration courts are still out.

The Gothamist reported on Wednesday that: “With September fast approaching, city officials are crafting a plan to reopen schools for New York City’s 1.1 million public school students.” To be specific: “Depending on the school’s chosen model, most students will attend in-person instruction in their schools between one to three days a week.”

Not perfect, but that is “one to three days a week” more than the New York immigration court will be open.

That Gothamist article then leads me my third reason. It reports that Gov. Andrew Cuomo (D-N.Y.) “announced on August 7th that based on the state’s low infection rates, he has authorized all school districts in New York state to re-open this fall for in-person education, including New York City.”

So immigration courts in other cities that were coronavirus hotspots have reopened. New York City schools will reopen (at least one to three days per week). And those schools can reopen because of New York’s “low infection rates”. Why can’t the New York immigration court — again, the nation’s largest — reopen for non-detained cases again?

TRAC reports that the two non-detained New York immigration courts (not specifically identified, but Broadway and Federal Plaza) have a combined backlog of 123,272 cases. How much has the backlog been reduced in the past five months? There may be some ambiguity, but I will guess that the answer is “by zero”, or something close.

This is a problem because, again according to TRAC, the average wait for a decision in those courts is 678 days and 882 days, respectively. That wait isn’t getting any shorter so long as those courts are closed.

William Gladstone, Victorian-era British prime minister, famously stated: “Justice delayed is justice denied.” William Penn, founder of the former colony and later state that bears his name, was blunter: “To delay justice is injustice.” EOIR should mitigate the injustices prompted by these closures and delays, and open the New York immigration courts, tomorrow if possible, but as soon as possible otherwise.

Let’s face it: It would be ridiculous for New York students to be in class while the city’s immigration judges are on recess.

What is an EDD Number? An EDD Customer Account Number is the 10-digit state unemployment insurance identification number that the Employment Development Department of California assigns to a … END_OF_DOCUMENT_TOKEN_TO_BE_REPLACED

As an immigration attorney, I try to provide clients with a basic, yet insightful, understanding of various aspects of a complex immigration system. It’s not always easy, but I often find analogies to … END_OF_DOCUMENT_TOKEN_TO_BE_REPLACED