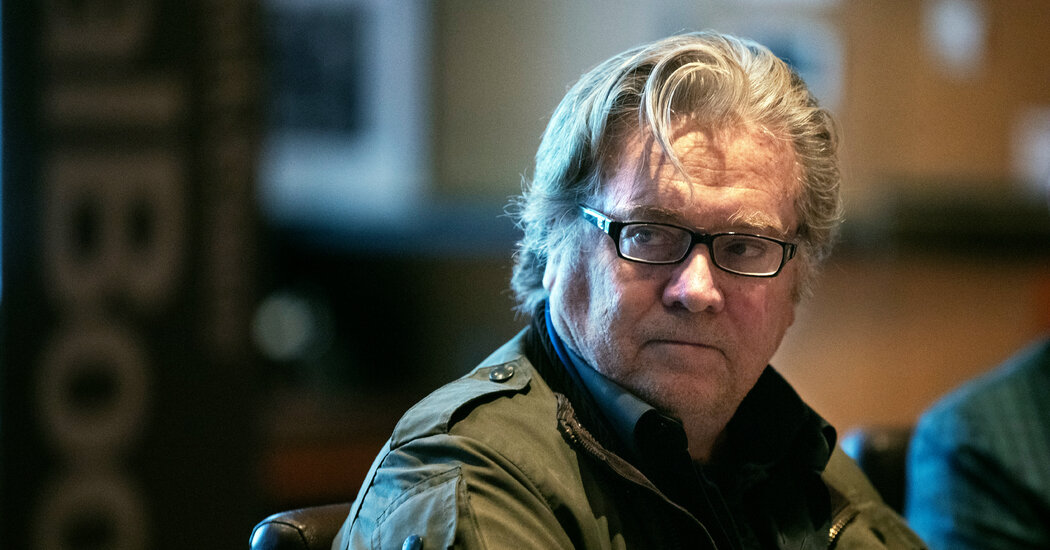 Stephen K. Bannon, President Trump’s former adviser and an architect of his 2016 general election campaign, was charged on Thursday with defrauding donors to a private fund-raising effort called

We Build the Wall, which was intended to bolster one of the president’s signature initiatives: erecting a barrier on the Mexican border.With a wounded Air Force veteran and a Florida venture capitalist, Mr. Bannon conspired to cheat hundreds of thousands of donors by falsely promising that their money had been set aside exclusively toward building a new section of border wall, according to a federal indictment unsealed in Manhattan. Prosecutors said that after siphoning money from the project, Mr. Bannon plowed nearly $1 million into paying off his personal expenses.

Mr. Bannon was arrested early Thursday on a $35 million, 150-foot yacht that was off the coast of Westbrook, Conn., law enforcement officials said. Working with the Coast Guard, federal postal inspectors and special agents from the United States attorney’s office in Manhattan boarded the vessel, which belonged to the exiled Chinese businessman Guo Wengui, the officials said.

The charges, filed days before Mr. Trump was to be nominated for a second term at the Republican National Convention, marked a stark turn of fortune for Mr. Bannon, a high-living and flamboyant political strategist. He had first burst into the public eye when he was in charge of the right-wing media outlet Breitbart, where he had aligned himself with the alt-right, a loose network of groups and people who promote white identity.

Audrey Strauss, the acting United States attorney in Manhattan, said Mr. Bannon and his three co-defendants defrauded donors to We Build the Wall by “capitalizing on their interest” in the border wall and falsely telling them that “all of that money would be spent on construction.”

The 24-page indictment, unsealed in Federal District Court in Manhattan, was by far the most politically sensitive case that Ms. Strauss has handled since she assumed her job after her predecessor, Geoffrey S. Berman, was fired in June by Mr. Trump.

Mr. Bannon was expected to appear before a federal magistrate judge in New York on Thursday afternoon. Investigators from Ms. Strauss’s office and postal inspectors conducted several searches around the country on Thursday morning, at the homes of the defendants and at other locations, law enforcement officials said.

Shortly after the charges were announced, Mr. Trump sought to distance himself from Mr. Bannon and the fund-raising initiative, though the president also expressed sympathy for his former chief adviser.

“I feel very badly,” Mr. Trump told reporters in the Oval Office on Thursday. “I haven’t been dealing with him for a very long period of time.”

The president said he knew nothing about the multimillion-dollar campaign but quickly contradicted himself, saying he disliked it.

“I don’t like that project,” Mr. Trump said. “I thought it was being done for showboating reasons.” He called paying for the border wall privately “inappropriate.”

A White House official said Mr. Trump did not know ahead of time that Mr. Bannon was being arrested, and he was told by aides after it happened.

One of Mr. Trump’s sons, Donald Jr., publicly promoted the We Build the Wall effort at an event in 2018, calling it “private enterprise at its finest.”

Donald Trump Jr. said in a statement on Thursday that he had no involvement with the effort beyond praising it at that one event.

According to the authorities, Mr. Bannon hatched the plot to defraud the donors with three other men: Brian Kolfage, a 38-year-old Air Force veteran and triple amputee from Miramar Beach, Fla.; Andrew Badolato, 56, a venture capitalist from Sarasota, Fla.; and Timothy Shea, 49, of Castle Rock, Colo.

Mr. Kolfage and Mr. Badolato were arrested in Florida on Thursday, and Mr. Shea was arrested in Denver.

Mr. Kolfage, who lost both his legs and one of his arms during his service in Iraq, created We Build the Wall as a GoFundMe page in December 2018. It was an immediate success, raising nearly $17 million in its first week online, prosecutors said.

To persuade donors to contribute to the effort, prosecutors said, Mr. Kolfage promised them that he would “not take a penny in salary or compensation” and that all of the money he raised would be used “in the execution of our mission and purpose.” According to the indictment, Mr. Bannon described We Build the Wall as a “volunteer organization.”

But all of that was false, prosecutors said. Instead, they claimed, Mr. Kolfage secretly took more than $350,000 in donations and spent it on home renovations, boat payments, a luxury S.U.V., a golf cart, jewelry and cosmetic surgery.

Mr. Bannon, working through an unnamed nonprofit organization, received more than $1 million from We Build the Wall, prosecutors said, some of which he used to pay off hundreds of thousands of dollars in personal expenses.

To conceal the illicit flow of money, prosecutors said, the four men routed payments from We Build the Wall not only through Mr. Bannon’s nonprofit group, but also through a shell company that Mr. Shea controlled. 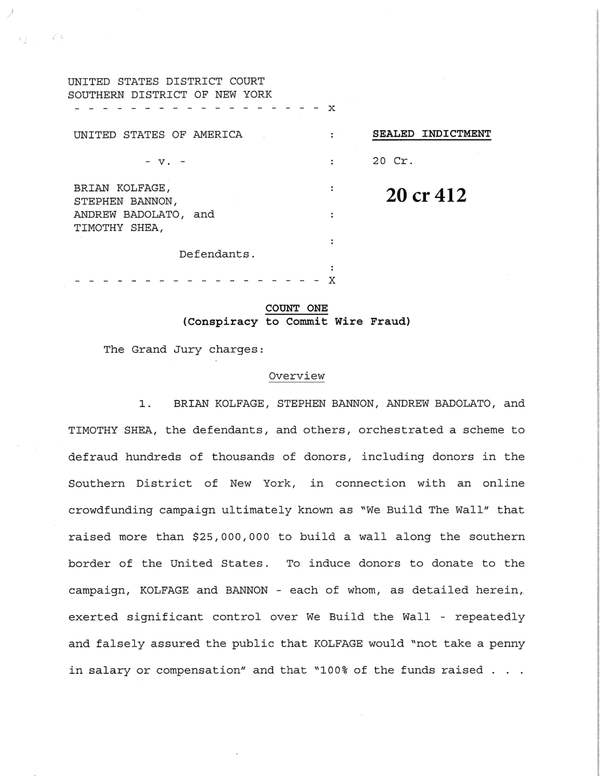 Mr. Bannon and three others are accused in a scheme to use funds raised for construction to pay for personal expenses.

Court papers suggested that prosecutors were in possession of several text messages between the men, including one in which Mr. Kolfage told Mr. Badolato that the payment scheme was “confidential” and should be kept on a “need to know” basis.

It remained unclear precisely when the yearlong investigation into the scheme began. But last year, a bank informed Mr. Bannon that federal prosecutors had subpoenaed records related to We Build the Wall, according to a person briefed on the matter.

Prosecutors said that despite the effort’s early success, there were questions almost instantly “about Mr. Kolfage’s background” and the viability of his promises to give the money he had raised to the government to actually build Mr. Trump’s wall.

Because of these concerns, prosecutors said, GoFundMe warned Mr. Kolfage that if he did not find a “legitimate nonprofit organization” to handle the money, it would return it to the donors. Mr. Kolfage claimed that the group had determined that only $800,000 of the funds needed to be given back.

“No rules were broken,” Mr. Kolfage said in an interview last year. “Ninety-four percent of the donors we have been able to reach are opting in. We’ve reached 75 percent of all the donors so far.”

But some donors wondered what had happened to their money.

Harvey Garlotte of Hattiesburg, Miss., donated $60 to the fund and was among those who complained when he received a refund — minus the $3 he had added as a tip for the group.

In a complaint to the Florida secretary of state filed last year, Mr. Garlotte wrote that he felt he had been cheated by We Build the Wall, noting that even though Mr. Kolfage lived in Florida, he could find no record of a Florida charity registration.

“From my side of the road, Mr. Kolfage was simply using a hot button topic, a very emotional topic, and his status as a wounded veteran, for selfish and self-serving reasons and personal financial gain,” Mr. Garlotte wrote in his complaint.

As the problems with donors mounted, Mr. Kolfage said that he would establish a board of advisers for the group and incorporate it as We Build the Wall Inc.

Mr. Kolfage enlisted Kris Kobach, the former Kansas secretary of state, to serve on the board. Mr. Kobach, a longtime Trump supporter and a prominent immigration hard-liner, was not named in the indictment.

Prosecutors said Mr. Bannon was by then already working with Mr. Badolato on a separate project: a nonprofit group dedicated to “promoting economic nationalism and American sovereignty.”

And within days of becoming involved with the wall-building effort, the two men took “significant control” of its day-to-day activities, prosecutors said, including its “finances, messaging, donor outreach and general operations.”

In January 2019, prosecutors said, the group announced that it was changing its mission and would seek to build a wall privately. The group told its donors that they would have to “opt in” to the altered plan, prosecutors said.

Several times, prosecutors said, Mr. Kolfage falsely assured his donors that every dime they gave him would go to the wall.

“It’s not possible to steal the money,” he said at one point, according to the indictment. “We have an advisory committee. I can’t touch that money. It’s not for me.”

Some of the payments, prosecutors said, were made to Mr. Kolfage’s wife and were disguised on tax forms as “media” expenses.

Source: Steve Bannon Is Charged With Fraud in We Build the Wall Campaign

What is an EDD Number? An EDD Customer Account Number is the 10-digit state unemployment insurance identification number that the Employment Development Department of California assigns to a … END_OF_DOCUMENT_TOKEN_TO_BE_REPLACED

As an immigration attorney, I try to provide clients with a basic, yet insightful, understanding of various aspects of a complex immigration system. It’s not always easy, but I often find analogies to … END_OF_DOCUMENT_TOKEN_TO_BE_REPLACED