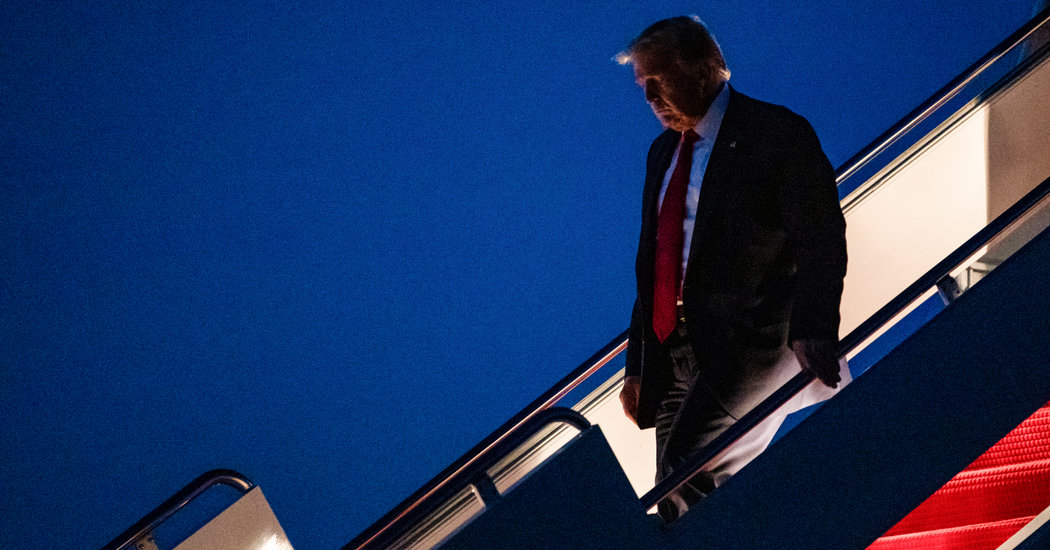 A group of prominent business leaders urged President Trump on Saturday to leave in place a program affecting roughly 800,000 young immigrants who are shielded from deportation, saying it would disrupt the economy and impact the battle against the coronavirus.

The letter, from members of the Coalition for the American Dream, an alliance of business and industry leaders, comes after the Supreme Court ruled last month that the Trump administration improperly wound down the Obama-era program known as Deferred Action for Childhood Arrivals, or DACA, a finding that was made on procedural grounds.

The signers of the letter included executives with Amazon, General Motors, Hilton Worldwide, Target, Apple, Google, and Facebook, as well as groups like the U.S. Chamber of Commerce and almost every sector of the manufacturing industry.

15:14 – 18:38 Business Leaders Urge Trump to Leave DACA Alone After Court Ruling Executives with companies including Target, Apple, Google and Facebook warned the president that any actions related to DACA would disrupt the economy and affect the battle against the coronavirus.

“As large American employers and employer organizations, we strongly urge you to leave the DACA program in place,” members of the group wrote about the program, which applies to people who were brought to the United States as children. “DACA recipients have been critical members of our workforce, industries, and communities for years now, and they have abided by the laws and regulations of our country in order to maintain their DACA status.”

The letter went on to say that “their work and commitment to our companies, their families and communities are critical to our nation’s strength, especially since there are tens of thousands of DACA recipients working as front line doctors and nurses and in other critical industries fighting Covid-19.”

“This is no time to disrupt the economic recovery of our companies and communities, nor the time to jeopardize the health and safety of these vulnerable individuals,” the letter said, noting that polls have consistently shown voters don’t want to see DACA recipients deported. “We ask that you leave DACA in place and refrain from taking any additional administrative actions that would negatively impact the DACA program.”

Mr. Trump has suggested he would try again to rescind the program, which he has alternately praised and criticized.

On Friday, in an interview with the Spanish-language network Telemundo, Mr. Trump gave a confusing statement about his plans to write an immigration-related executive order in about four weeks.

“DACA is going to be just fine,” Mr. Trump said, adding that he was going to issue a “big executive order. I have the power to do it as president and I’m going to make DACA a part of it.”

Then he immediately said, “But, we put it in, and we’ll probably going to then be taking it out.” At another point, he said that it would be a “very big bill” that would call for merit-based immigration and include a DACA provision. He then said there would be a “road to citizenship” in the executive order — which he repeatedly confused with a piece of legislation. Presidents cannot create a pathway to citizenship without congressional action.

Almost immediately after Mr. Trump’s interview, a White House spokesman issued a statement that was quite different from what the president said. The statement said that Mr. Trump was working on an executive order to “establish a merit-based immigration system to further protect U.S. workers,” something that the White House has been planning for weeks. The statement made clear it would not relate to DACA or a “road to citizenship.”

What is an EDD Number? An EDD Customer Account Number is the 10-digit state unemployment insurance identification number that the Employment Development Department of California assigns to a … END_OF_DOCUMENT_TOKEN_TO_BE_REPLACED

As an immigration attorney, I try to provide clients with a basic, yet insightful, understanding of various aspects of a complex immigration system. It’s not always easy, but I often find analogies to … END_OF_DOCUMENT_TOKEN_TO_BE_REPLACED