On Thursday, June 06 many people were glued to their tv-sets while waiting to hear the fate of almost 700,000 undocumented immigrants. People across the Nation showed their support at federal buildings including the White House and the Supreme Court.

But Thursday was not a day Trump will want to remember after hearing the  Supreme Court ruling had turned against him. Supporters from around the world cheered and celebrated as if it were personal, and it was.

Chief Justice John Roberts, favored the five-to-four decision and said this was not a matter of whether or not the DACA program polices are sound or not, this decision was made because the Trump administration had violated government procedures while trying too quickly to end DACA back in September of 2017. “Their arguments were weak anyway.”, he added.

The Supreme Court ruling will allow the DACA program to continue taking new applications, but who knows when Trump administration officials will strike again.

For now, people can only wonder what the Trump administration’s next move will be while the fate of  700,000 “dreamers” remains in question. 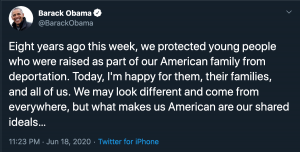 Barrack Obama’s reaction on Twitter after the decision was made

Ex-President Barack Obama launched DACA in June of 2012 which provided a reprieve from deportation to young people who came to the United States as children. DACA does not give anyone legal status in the U.S. nor does it leed a pathway to citizenship. However,  it does allow them to be lawfully present without the threat of deportation.

What Are The Requirements For DACA?

Photo by Maria Oswalt on Unsplash

What is an EDD Number? An EDD Customer Account Number is the 10-digit state unemployment insurance identification number that the Employment Development Department of California assigns to a … END_OF_DOCUMENT_TOKEN_TO_BE_REPLACED

As an immigration attorney, I try to provide clients with a basic, yet insightful, understanding of various aspects of a complex immigration system. It’s not always easy, but I often find analogies to … END_OF_DOCUMENT_TOKEN_TO_BE_REPLACED